While variations on the waist length double breasted leather jacket style we now know as the "Motorcycle Jacket" were produced through the 1930s by specialty makers and under the "Aviator" name, the name itself didn't stick until after WWII.

1948- Kit Karson.
The basic style has changed very little since this point. I would say the biggest difference between these and pre-war "Aviator" style jackets would be the material, with aviation jackets predominantly being produced in capeskin, while motorcycle jackets were produced in heavier horsehide. The hides used on these early jackets was still nowhere near as heavy as what you find on many of today's jackets.

Many newspaper ads of the period used preexisting stock art from their "Aviator" models, but applied the Motorcycle name in the late 1940s.  It's possible these shops were trying to ride the wave of the Motorcycle Jacket's early popularity to get rid of old stock, but I think it's probably more likely that they were just using old advertising artwork because they already had it and it was "close enough" 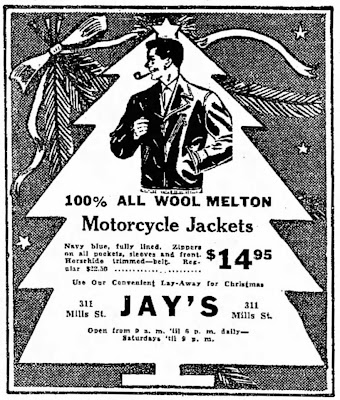 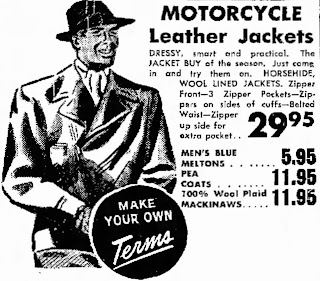