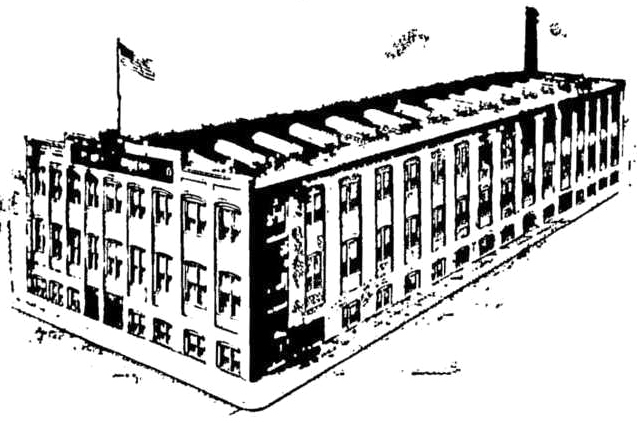 Perry Sportswear was a division of the Royal Coat Company, which also had factories in Boston, MA, and Bangor, ME. They came to Newburgh in 1939, to a building located at the intersection of 3rd and Smith Streets. Their President was Isaac Friedman, Secretary Martin Langer, and Superintendent Eli Marcus. Beginning in 1941, Perry shifted 85% of production for the military - Perry was a notable manufacturer of A-2 flight jackets. (source) During the war, they employed 250 workers. Their NY factory was located at 54 Liberty, Newburgh, NY, and is pictured above. The factory originally housed the Cleveland Whitehill Co., makers of "Newburgh Never-Rip" overalls. It was later home to "Layman, Berkwits and Scott", makers of Mackinaws, suits and overcoats.  (source) Perry occupied the building in the 1940s. The building fell into disuse, and burned in 1981. Today the site is an empty lot.
Grand plans of postwar expansion were not to be. The Newburgh plant was sold in 1946 to a textile company called "Hand Prints". Perry Sportswear Inc. dissolved, taking their equipment from the building.  Workers in the plant were absorbed by the two other factories owned by the Royal Coat Company.