Skip to main content
Labels
Posted by David Himel May 30, 2011

Summer in Kensington: Not Leather Time 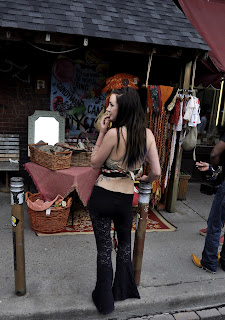 I live in one of the most amazing neighborhoods in my city.  The cool part about Toronto is the instant and incredible transition of Winter into Summer.  This weekend after a long winter of snow and rain...the weather has broken and Summer is here.   Kensington market is the best place in the city of Toronto.  It is also the engine behind the vintage clothing business here.  For years this place was known as the Jewish Market.  It serviced the immigrant Jewish communities that filled the warehouses down the street sewing the clothing of North America in the early 20th Century.  When the masses of sewers would pour out of their Western red cedar beamed factories, they would head to the synagogues and food markets in the "Jewish Market".  Most of my ancestors immigrated to this neighborhood.  Over the years when the schmata business migrated northward, and the hippy/yuppies transformed other neighborhoods sucking the soul out of them, Kensington remained a place for the disenfranchised, the young and immigrants.  The sewing factories of Spadina transformed from Jewish and Irish, to Italian and eventually Chinese and Vietnamese sewers.  Many became computer software and other "chic" downtown business spaces.  Kensington has somehow remained moderately democratic and diverse.  The Jewish sewing business' transformed themselves into vintage clothing stores and the deli s and the dairies became cheese stores, hipster local food butcher shops and immigrant food supplies for Africans and other communities.  The Pearl Harbor Tatoo shop is a classic example of re-appropriation.  The Pearl Harbor  modeled itself on a 1940s shop, and the owner Bill managed to buy the 100 year old shelves from my neighbor Rotman's Haberdashery when poor David Rotman had to go to the nursing home.  Bill used the 100 year old 3 generations patina of Davids hat shop to build a beautiful vintage aesthetic into his tattoo parlour.  While some might think it unseemly, I think it is a stunning example of the spirit of the Rotman family living on in a new and beautiful context.  I love my hood and all its diversity!  It makes finding vintage jackets a joy.