Skip to main content
Labels
Posted by David Himel May 08, 2011 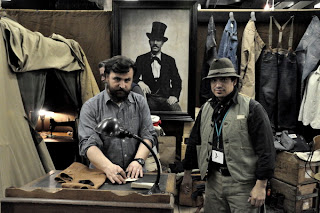 Well, the best part about the Inspiration show was hanging about for the slow meetings with people I otherwise only had seen on the internet or ebay.  After years of emailing people it is rare for all of us to be in the same room together.  For example I met Derek Harris of Lewis Leathers years ago via ebay when I was selling original Lightning zippers on ebay.  He inquired if I could get more.  I emailed him back "why?"and he told me he had taken over Lewis Leathers intent on resurrecting it from the abyss of history.  This was our first meeting for real in real existent face to face form.  His friend and store 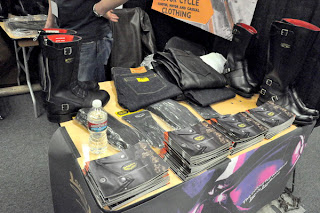 owner Pete Makarski came from England just to see the show.  Now there was no shortage of drama...poor Derek's goods did not make it through customs for the first day, and he was deathly ill, but with the help of Pete he got his goods and booth set up the next day.  Cool boots and gloves!
The Rising Sun vintage booth was killer, looked like an old mining camp. 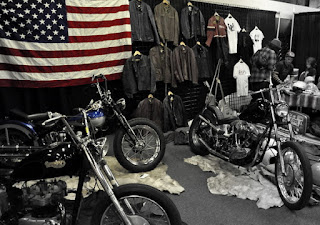 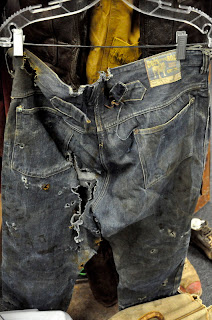 If you are interested in Denim, and denim of the old west, there were plenty of jeans on show that were older then a hundred years.  Boss of the Road miners jeans had some of the coolest graphics on their tags that I have ever seen.  This show was about design not necessarily buying and wearing garments.  In fact the rougher the jeans the better because there is no urge to keep them and wear them if the right buyer comes along. 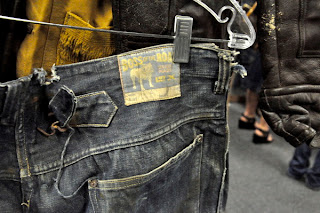 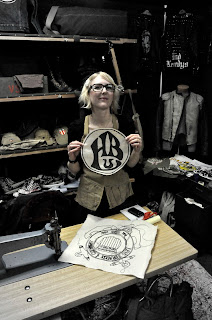 Junkyardjeans made me this bad-ass patch from their traditional chain-stitch machine.  I really enjoyed it for the hour I had it before it was stolen.  Eric owns a cool 1950s green and white Langlitz jacket in the background for which  Dave from Langlitz told me a great story which I will tell in a later post. 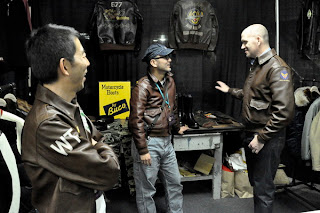 One of my favorite moments was when my good friend and co-conspirator John Chapman met face to face with the lads that own Real McCoys.  North America's premier genius A-2 maker JC of Goodwear Leather meets the best A-2 makers of Japan....Real McCoys .   They chatted about techniques, leather, suppliers and parts.  It was an incredible head to head meeting.  No one held back, there was no competition, just mutual admiration. Each one wearing one of their own creations.  It is just amazing to see the commitments to these micro-brands of vintage inspired collections and vintage. 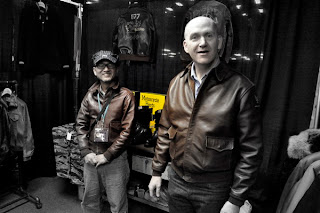 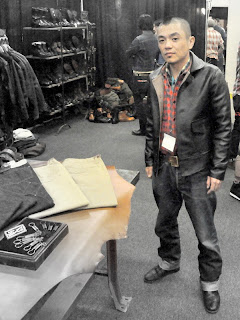 There is no glory in starting a clothing brand.  Of course I had my Himel Brothers Leather jackets at the show.  I was very very proud when Atsu Tagaya, Japanese clothing genius and designer purchased one of my jackets and was wearing it while showing his own line of clothing off to some of the most important Japanese collectors and designers in the world.  Needless to say there were some fringe benefits as well as the clientel was quite becoming! 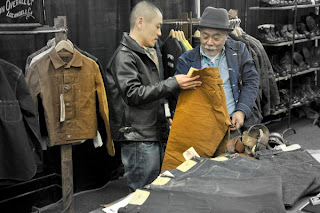 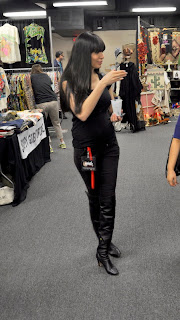 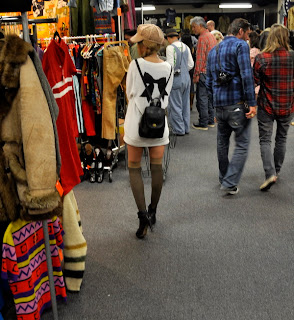 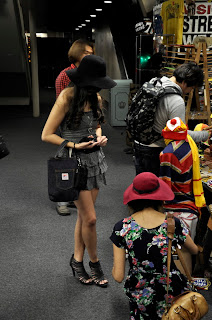 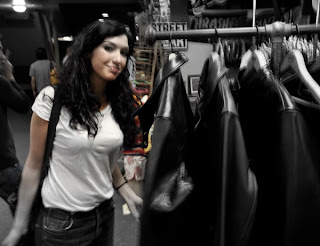 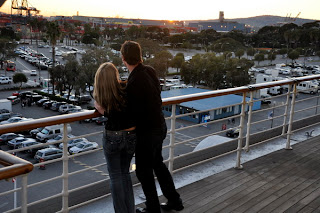