Going to a vintage show like the Rosebowl is exciting.  But it does not compare to going to a Rosebowl and going to the second annual Inspiration show organized by master vintage socializer Rin Tanaka.  Last year I had the privilege to show my new project Himel Brothers Leather at Rin's first show and this year I came back to show again and to take lots of photos and stories for this blog.


For more stories about Inspiration and Himelbros check out my other new   Himel Brothers Blog
Nance and I got up super early for a long day of travel. There is no greater early morning motivator than February winter blues in Toronto.  After yet another winter storm and cold snap, the airport and a Tim Hortons coffee are a welcome wake-up.
After a nice long Air Canada flight the magic vista of L.A.s evening urban sprawl was an awesome welcome to L.A.X. 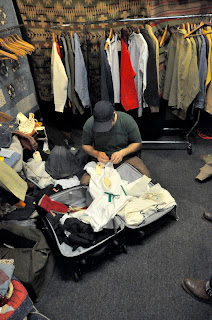 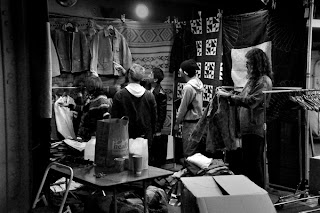 We stayed at a friend's house in Culver City and got up jet-lagged and ready for the day.  East coast jet lag is not a great help when navigating the back roads of L.A. but luckily since the highways of Toronto are 100 times worse for traffic and the drivers are terrible and aggressive, the relative laid back traffic of L.A. is like a "vacation"

There was no time to check in at all. I got my passes and it was off with the camera to take pictures of the set-up action!  The best part of these kinds of shows is what happens while people are setting up.  If it wasn't for my intrepid wife helping me set up my booth I would not have been able to run around and snap photos of all the cool action going on!


Inspiration is in actuality a culture jam.  The participants are for the most part the dealer/designers of the vintage scene in L.A. and as well, a big healthy dose of Rin's other love and obsession with surf and biker culture. 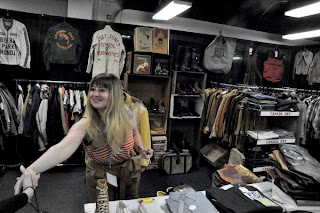 I of course intend to try and do an in depth look at some of those people and their brands.  The other big components of Inspiration are the designers and labels that show up to interact, socialize and buy inspiration-al design pieces to build on their collections.  The tiers of vintage dealers included Rosebowler's and even some of the younger folks prominent on ebay and with virtual stores.  Many of the very important local L.A. stylists and store owners were in attendance as well.  So the show is really like a design and inspiration college with phd's of clothing and clothing design all present. 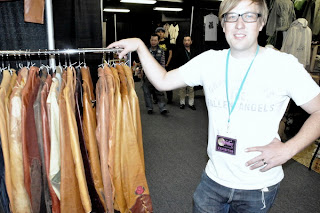 I made sure as the set up began to run around and say hello to old friends and go shake the hands of new friends.  Many many people were there who I have been communicating with over the internet but had not actually met in person!  It still amazes me how valuable the internet has been in establishing my most important business relationships. 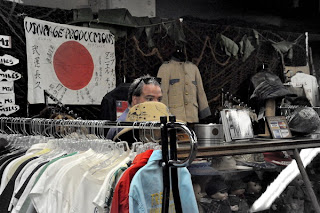 A lot of the preshow excitement consists of checking out peoples displays and what incredible vintage pieces they have brought down to show or sell!  A lot of the pre-show business occurs between dealers who buy, sell and trade rare collectibles and clothing that they have long been searching for.  Some of the people show here are David from Goodbye Heart  I don't know much about surfing but I think Shelter makes boards...right here. The guy with the suitcase is vintage genius and designer John Gluckow of Strongarm Clothing & Supply Co, that cool stall 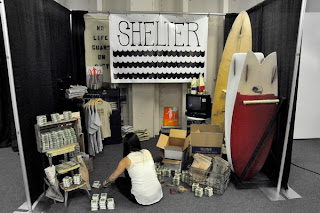 with all the military gear is Bob Chatt from  Vintage Productions.  The tent is Samurai Denim and The Flat Head was setting up their booth when I took the pic.  Larry Heller was Rin's King of Vintage last year and has his own line of clothing detailed here! And that last groovy guy is Brian  of "Snappy Gabs".  There were soo many more awesome buyers, vendors and designers that is impossible to detail them all.  We will try in later blogs! 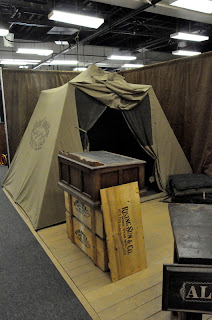 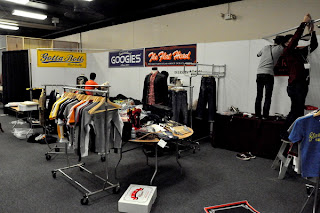 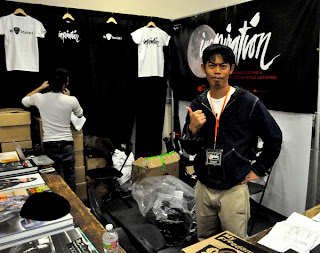 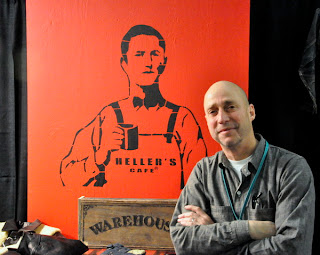 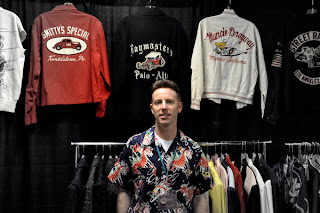