The CRTC: Canada the Colonial Province and Konrad von Finckenstein and UBB 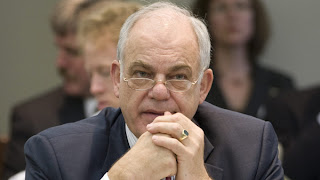 So this is going to be one of my classic rants that will appear to have little to do with leather jackets but of course it does.  Who is this regal sounding Von Finckenstien and the Canadian Radio-Television Telecommunications Commission.  VF as he shall be known is a former Judge and Canadian style free tradist.  Now before I go off and rant about the CRTC I will say that VF does have something going for him on the plus side.  He was the senior civil servant here who investigated and brought charges

against the big AGRO corporations that were price fixing Lysine and amino acid feed additives in animal feed.  One of those classic little stories where we the little guy all pay a few bucks out of our pockets to illegally subsidize the globally mega rich who were pretending to compete while in fact (not unlike the gas companies) were gouging all of us for our food supply. Ok big ups VF. (See Russel Crowe and the movie THE INFORMANT)
Now we move onto the bad.  What is the CRTC  They have a website you can read all about them.  They were for the long and short, basically a Canadian content manager set up to keep little tiny Canada protected from big bad ugly USA and their huge telecommunications industry, and protected Canadian consumers from the big bad ugly telecommunications monopoly here in Canada.  Why do we little tiny Canadians need protection you ask?  Well it goes back a long long way...but again to make things short...A long time ago in England these royal fellows decided to carve up North America and give it to their friends like the Hudsons Bay Company who once owned 15% of North America.  One of those little fiefdoms became Canada.  So business in Canada runs like a feudal system and Canadians become the Serfs who feed our feudal lords.  The CRTC was created to A: remind the feudal lords of BELL and ROGERS (our basically two Cell phone, TV, and Internet/cable providers) that we little Canadians need to eat once and a while, and B: protect all our little Canadian actors and directors like Jim Cameron, Neil Young, Ryan Reynolds, and Arcade Fire from not being swallowed up in a morass of American culture.  Well guess what, since 1979, Canadians have somehow taken over a good chunk of US culture both Musically and Theatrically, the Internet is free and open and you cant protect anybody from anything and oh..this is the most important one, the CRTC has let BELL and ROGERS  grow fat from the land, resulting in a virtual monopoly of price fixing leading to the worst...and I mean worst cell phone, cable and telecommunications service in the world. Canada ranks near dead last for the high cost of cellular phones...my mother had a 900 dollar cell phone bill last month and this is typical, Canada officially has the worst and most expensive cell phone service in the world.  Even worse and this is a quote
Canada is ranked 19th out of 154 countries according to how advanced its use of information and communications technology (ICT) is, a drop of 10 places from ninth in 2002, according to the Geneva-based International Telecommunication Union.
The ranking was based on a number of factors, including the number of citizens per 100 who had fixed line and mobile cellular phones and accessed internet, broadband internet and mobile broadband services. It also considered the amount of bandwidth available per internet user, the proportion of households with computers and internet access, and the literacy and education levels of a country's population.
Sweden ranked first in the 106-page report, followed by South Korea. The remaining countries in the top 10 were all from Western Europe: Denmark, the Netherlands, Iceland, Norway, Luxembourg, Switzerland, Finland and the United Kingdom.

The one area where we excelled and did not behave like a monopoly was the Internet.  Here in Canada the Internet is unmetered.  Meaning Canadians pay a singular monthly fee for unlimited service.  Even though the CRTC has completely failed in protecting us from BELL and ROGERS and their monopoly via the cable and phone, they did protect us from the internet monopoly by forcing our two feudal lords to lease out lines or tunnels to new internet companies who then created limited competition in the market.  As a result Canada has had great free and open internet usage and even price competition.  Even though BELL and ROGERS have tried to stop competition in the internet market by screwing with these new companies and their tunnels to BELL and ROGERS by throttling the internet or slowing down their competitors service.  A nice clean healthy internet has helped spread Canadian culture globally and give unlimited access to the future of knowledge and technology.  Of course the natural result was people started turning their backs on the feudal lords and using the internet to watch TV and use it as a phone to avoid the virtual monopoly pricing for these services elsewhere.  Well guess what our feudal overlords could not have their fields go untended.  The very fundamental foundation of unmetered free market  internet has be dismantled by you guessed it......the CRTC!  I found this quote right on their mandate page:

The CRTC does not regulate the rates, quality of service or business practices for Internet service providers. So we can’t pursue complaints about these services for you.
For more information, including where to send your comments or complaints, go to Internet

Well....sadly this is not the case.  The CRTC first allowed our feudal lords to throttle or slow down internet service from our newly formed competitive internet service providers on the feudal lords already decaying network of service (we have poor infrastructure because our monopolies dont want to spend money upgrading the service when they have little or no competition).  And now the CRTC has decided to let our feudal lords of BELL and ROGERS  fundamentally change the way  Internet is billed for in Canada.  No longer unlimited access....OUR FEUDAL LORDS ARE GOING TO METER OUR BILLING.  Little Johnny Canuck can no longer upload his opus, or homemade 1080 p Starwars movie to Youtube, nor can we cruise blogs and Facebook, or disseminate our Canadian content without paying off our feudal overlords. By metering the web these morons are changing the fundamentals and well being of the free flow of ideas, knowledge and culture and if our cell phone experience is any indicator...Canada is returning to the feudal or perhaps stone age.  It is time to get rid of the CRTC which has lost sight of its mandate to protect Canadian culture and consumers from monopolies.  It is also time to write your Member of Parliament and Provincial MPP and make this an upcoming election issue.  It will fundamentally change everyone's life here in Canada. Also if we can kindly ask Von F. to retire that wouldn't be so bad either because sadly these old grey haired fellows sometimes don't understand the vast cultural implications of their poor decision making.  Remember to sign the petition as 250 thousand people have already as well
Once again please DO NOT FORGET TO SIGN the Stop The Meter petition at:
http://stopthemeter.ca/
Sorry to all the non Canadian Leather Nuts...I just want to be able to keep on bloggin and Interneting without taking on a night job to pay for internet access!
Email Post
Labels: CRTC Internet Konrad von Finckenstein Metering