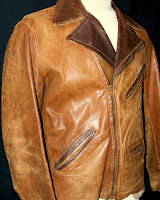 Some of my personal favorite jackets are the super tough flamboyant productions of the 1930s and 1940s.  Jackets appealed to both the male sensibilities of masculinity, pomp and utility.  There is no other way to explain the incredible concoctions of early horsehide jackets and grizzly jackets.  Now before we get concerned with the endangered grizzly...this is more of a nom-de-plume.  The grizzly refers to jackets with fur on front.  These jackets are often  harking back to the rough and tumble pioneer period in North America.  Early settlers, natives and traders would wear leather garments that were often simply tanned with bark or brain tanning and had basic robe like construction.  Fur was rarely removed and often worn on the outside of the jacket.  Heck, if it can keep a buffalo warm why not a man.  Many of the seriously  tough men and  motorcyclists of the 1930s could often be seen photographed in fur on grizzly jackets while riding dirt roads of the back country. 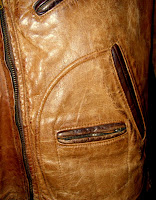 The other interesting component of this decorative display  of different leathers is the two tone jacket.  Check out this beauty that just sold on Ebay.  Nice inverted D pocket and tobacco pocket as it would have been advertised.  Very practical and yet very impractical with the two tone leather and extra care and effort to put the jacket together!  Looks like a Kit Carson! 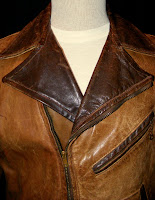 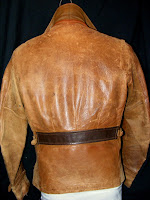 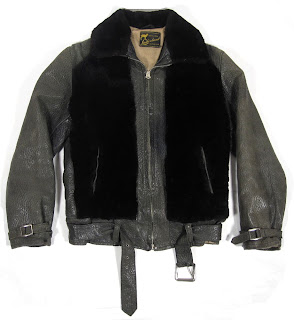 This jacket is currently  on ebay.  The pictures came courtesy of Punk Rock Max .  One of the things that perplexes me about this jacket is the texturization of the leather.  I have seen this in dozens of jackets that I have owned over the years  I figured it was either to soften the horsehide or to create a fake pigskin effect?  If you have any answers for me feel free to send them along! 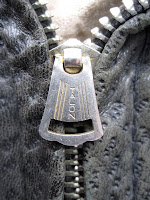 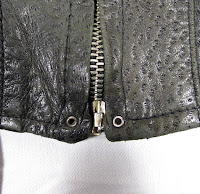 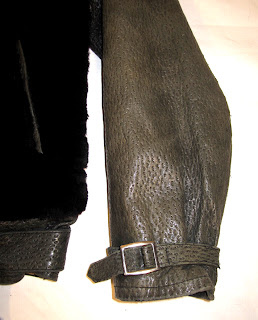 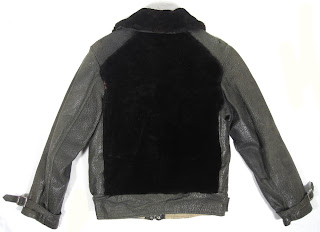