The Great Old Companies and their Trademarks 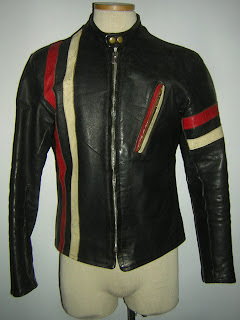 One of the really cool aspects of good old leather companies were their design trademarks. Not silly design trademarks in the legal sense (although those were very common in the early days) but more design trademarks that were style markers. If you infringed on another maker's style you risked having your brand identified as another maker's, so different brands naturally defined themselves in order to differentiate themselves. One must speculate that in the old days there was more value in "being unique" than ripping off your competitor. To be fair this was not always the case. In the 20s and 30s many companies parroted each other redefining each others style often making subtle changes and even improvements on design. I remember an Admiral Byrd jacket that had a patent pending on a pocket design in the 30s that became common place by the 1940s. By the 1950s and the development of many companies who competed against each other to make common styles specs defined by the U.S. Army or police forces, many companies started to develop trademark styles. Harley Davidson defined itself with the smooth back and d-pocket of the cycle champ and cycle queen, and many lesser companies produced knock offs of the cut all the way into the 80s (Brimaco is the classic example) but many many companies promoted their trade mark style and were rarely copied. Passiac Leathers was one of those companies. The created the diagonal pocket round neck cafe racer. Those diagonal pockets were their trademark! Rarely have I ever seen a Passiac that wasn't a basic black cafe racer, but this one combines their trademark style with the exotic colours of a true 1960s cafe racer a la Bates!!!!!
Email Post
Labels: BATES Passiac Leather vintage jacket 1940s 1950s 1960s