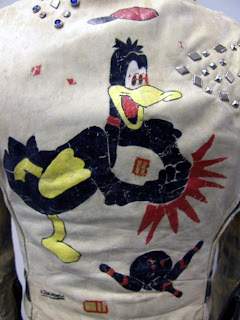 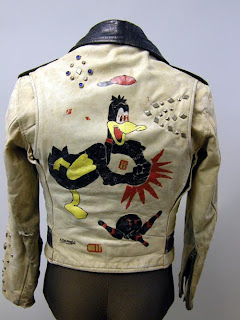 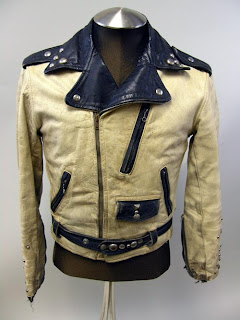 Check out the Wolf Sportswear two tone motorcycle jacket! Does something seem familiar. The amazing effect of the end of World War Two was a mass return of thrill shocked dissillusioned men who returned from the terrifying dangerous missions of Europe, Asia and Africa to relatively dull living in America, despair and unemployment. These young men became the modern day rebels of the late 40s and 50s. With the action of the war over they found themselves with out the comradeship of their sqaudrons often swapping the seat in a bomber command or fighter, for a motorcycle and buddies who knew them in action. These men took the paintings of their bomber groups which were influenced by the carefree and often cynical characters of animation. Animations that often acknowledged and entertained more real themes then the news of the day. This customization carried over to club jackets of the forties and fifties. This white and black jacket is a classic example of this kind of theme and expresses absolute rebellion. The loud colors and threatening studs served a dual purpose; to make one visible on the bike, and like modern day punkers, to say fuck you to everyday fashion by being as noticeable and dangerous looking as possible!
Email Post