LANGLITZ: A piece of History 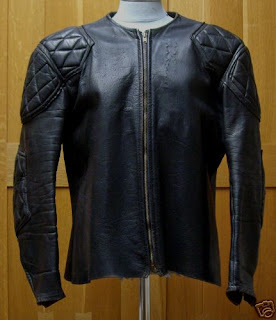 I've been reading a lot of chatter about leather jackets lately. I am amazed at some of the closet historians out there, and dumbfounded by some "voices" in the discussion that are more tude then knowledge. I'm all for chat, even wrong headed chat, but geez make sure you know a little of what you speak or inform yourself.
A fellow recently expressed the query "why are Langlitz jackets so revered, the use the same designs and the leather doesn't seem that great?".

I thought about this a lot lately! It seemed to ask the question why is the present day maker Langlitz sought after by so many and paid a premium for (as perceived by this guy). First contextual note: Langlitz jackets may seem expensive from the perspective of this dude, but in the world of high fashion leather...Aero, Langlitz, Lost Worlds et al are actually quite low on the price scale. Sure, you could buy a 169 Pakistan special, or find yourselves bouncing down the highway in a Joe Rocket jacket with cool fake eternal spinal cords and alien padding, but from the perspective of leather 1200-2500 is right in the middle. If you had a custom jacket made by Bill Wall, you could pay upwards of 4000-5000 dollars. Routinely Italian designers charge 2500-15000 for their weird incarnations, and there are certainly places I don't know about where you could spend lots more for custom pieces. I don't think price is an issue when looking for quality. Price is for people who cant afford the best! I recently read a story published by Scottish Bag Pipe and Kilt manufacturers who have had their business' challenged by imported kilts, pipes and knives and such from the east. As these fine laddies point out, if your bag pipes, kilts and such are cheap knockoffs made in foreign countries, what is the point of celebrating the Scottish heritage. You could save 2000 bucks to put traditional Scottish craftsman out of business, nice ironic kilt wearing statement. I'm so cheap I put the Scots out of business!

Ok, so obviously moving on from price, why Langlitz. From my perspective, the first answer which is not so obvious has to do with trends. Rin Tanaka started a craze with his books on Motorcycle jackets available through Schiffer Publishing. More often than not ebay listings of good vintage jackets refer to Rins book when selling their wares. The craze began in Japan way back in the 1980s, where young and old dudes alike have been adoring and living the American dream of the "motorcycle" guy for years and it spread to American and European readers. Rintaros book celebrated the few remaining survivors in the Jacket business from the great imported cheap jacket kill off. At some point price outweighed quality. Sometime in the 1970s manufacturers chose to make money riding on the memory of their quality North American (and in some cases European) manufacture and ruined their brands producing in Japan, Pakistan, Turkey and South America. What happened was inevitable. Initially they profited in North America, then eventually these out of country manufacturers learned to make their own brands and circumvent their American counterparts. Simultaneously, consumers unlearned quality...they learned to purchase crappy jackets for cheap. Very quickly great brands could no longer compete with cheaper imports and bamn, no more good jackets. Worse, the cultural memory of what quality fit, fashion and materials were all but dead by the 1980s. I remember interviewing a fellow who ran Brimaco Leather Jacket Company in Montreal. He was the third generation of Jacket makers to take over the company which became a property management company in the 1990s. He said they tried everything to save money to out compete imports, right down to buying his own cattleskins and driving them to the tannery himself!!!
To the point Rin celebrated the last men standing so to speak. This meant Langlitz leathers. They had the patterns and the original resonance of Ross Langlitz who created the brand with his old school motorcycle values. The hand of Ross could still be felt on the jackets. Previous to these books, people were isolated who were into these values of quality. Now you have the resurgence of old brands; people are buying up old motorcycle brands like hotcakes from the hotcake vendor. Some are trying to recreate the quality like Lewis Leathers and some are not!
My other point regarding why Langlitz remains well sought after regards the way they manufacture. They remain small, choosing to produce 5 or so jackets a day. They choose to make custom pieces, which is a lost art today. They choose to use the best "NORTH AMERICAN LEATHER" available, which means you are dealing with ethically produced clothing. These are all very good choices for reasons I will not go into at the moment. Sometimes being really good at what you do and remaining true to the past is a good thing, there may be new guys in the business ( I want to be a new guy) but that doesn't detract from the "old guys". If you buy a Langlitz your buying a piece of brand history. I will point out many many companies moved offshore to make their stuff and ruined their brands Gandalf, and many of the hippy jacket companies absolutely destroyed their business' this way, Langlitz remained a craft business...and you are paying for craft. It is amazing that they are still here, and people buying their products are supporting that vision in its entire set of implications which is a good thing. We as a culture need to spend less on more, not more on less or we will kill ourselves, and I for one am happy to have one or two good things then 1000 crap pieces of garbage. Learn from the Japanese who cant afford big spaces and big houses so they fill their lives with big quality purchases of the little things in life, just like the people in American culture in the 1930s who invented these values!
Email Post