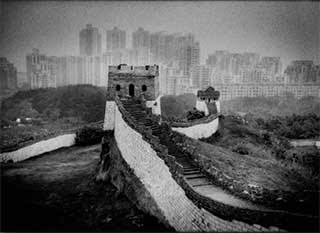 I'm on holiday in Reno, Nevada enjoying the cool desert air and the fabulous golf and poker. Happiness is being up at poker! I played with Ken Shamrock, and a host of characters since I have been here. I had a local cop beside me at one table, and to my surprise he wanted to discuss leather jackets! It was an inspirational moment. When I returned to my suite, there was a documentary on China's growing industrial toxicity and how its people are being decimated. Apparently 90% of China's rivers (which are its only water supply) are so toxic as they are deemed dead. There are entire towns and cities where populations have gone from cancer rates of 1 in 100 000 to 1 in every hundred or even higher. It brought home to roost for me why it is more important than ever to support local business and local economies. Look, you can own a reasonably produced cheap jacket with no style for almost free, or your lawn furniture, or that bbq, but in the end all you have done is leveraged the health of men, women and children in the third world. The worst part is the local governments in China ( and probably elsewhere) are complicit in the poisoning of their own people because they own and collect revenues and taxes from these factories, tanneries and other crude industrial polluters. If it wasnt ok in 1890 in North America and Europe it shouldnt be ok in China in 2008.

The process is already under way. Acid rain caused by China's sulfur-dioxide emissions severely damages forests and watersheds in Korea and Japan and impairs air quality in the US. Every major river system flowing out of China is threatened with one sort of cataclysm or another. The surge in untreated waste and agricultural runoff pouring into the Yellow and China Seas has caused frequent fish die-offs, and overfishing is endangering many ocean species.

The growing Chinese taste for furs and exotic foods and pets is devastating neighboring countries' populations of everything from gazelles to wolves, and turtles to parrots, while its appetite for shark fin soup is causing drastic declines in shark populations throughout the oceans. According to a study published in Science in March 2007, the absence of the oceans' top predators is causing a resurgence of skates and rays, which are in turn destroying scallop fisheries along America's Eastern Seaboard. Enthusiasm for traditional Chinese medicine is causing huge declines in populations of hundreds of animals – including tigers, pangolins, and sea horses. Seeking oil, timber, and other natural resources, China is building massive roads, bridges, and dams throughout Africa, often disregarding international environmental and social standards.
Email Post